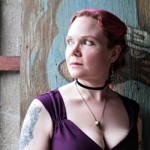 Amanda Downum’s DREAMS OF SHREDS AND TATTERS, a contemporary story influenced by Lovecraft’s Dreamlands in which Liz Drake must unravel the truth behind a drug called mania and a modern-day cult of Dionysos which masks something far more ancient and terrible, for publication in 2015 to Jonathan Oliver at Solaris by Jennifer Jackson.